That the plane has so many problems that pilots have to turn off many of its systems to safely fly it not only is a big RED FLAG, but flat out CRIMINALLY DANGEROUS TO SELL AND FLY. This plane has crashed 12 times in the last TEN MONTHS. That's not counting engine fires, computer failures in flight, and other issues.

We also know straight from Boeing that the MCAS could change the pitch of the adjusters 2.5 degrees instead of the .9 believed when the plane was certified.

You can't save the plane from the malfunction that brought down those two flights. There isn't time to screw around with flipping switches when the plane is trying to point the nose down during takeoff. The pilots will be doing anything they can to keep the nose pointed up and gain airspeed. Which is why the airspeed was so high so close to the ground. 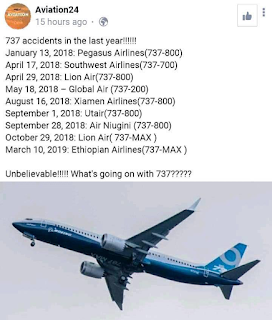 An off-duty pilot hitching a ride in the cockpit jump-seat of a doomed 737 Max 8 last October reportedly saved the plane just one day before it crashed off the coast of Indonesia while being operated by a different crew, killing 189 onboard.

According to Bloomberg, the 'dead-head' pilot on the earlier flight from Bali to Jakarta was able to explain to the crew how to disable a malfunctioning flight-control system by cutting power to a motor driving the nose of the plane down.

The previously undisclosed detail supports the suggestion that a lack of training is may be at least partially to blame in the March 10 crash of another 727 Max 8.


The previously undisclosed detail on the earlier Lion Air flight represents a new clue in the mystery of how some 737 Max pilots faced with the malfunction have been able to avert disaster while the others lost control of their planes and crashed. The presence of a third pilot in the cockpit wasn’t contained in Indonesia’s National Transportation Safety Committee’s Nov. 28 report on the crash and hasn’t previously been reported. -Bloomberg

As we noted last week, several pilots had repeatedly warned federal authorities of the Max 8's shortcomings, with one pilot describing the plane's flight manual as "inadequate and almost criminally insufficient."
"The fact that this airplane requires such jury-rigging to fly is a red flag. Now we know the systems employed are error-prone — even if the pilots aren't sure what those systems are, what redundancies are in place and failure modes. I am left to wonder: what else don't I know?" wrote the captain.


After the Lion Air crash, two U.S. pilots’ unions said the potential risks of the system, known as the Maneuvering Characteristics Augmentation System, or MCAS, hadn’t been sufficiently spelled out in their manuals or training. None of the documentation for the Max aircraft included an explanation, the union leaders said. -Bloomberg

"We don’t like that we weren’t notified," said Southwest Airlines Pilots Association president Jon Weaks in November. "It makes us question, ‘Is that everything, guys?’ I would hope there are no more surprises out there."
In the Lion Air crash, a malfunctioning sensor is believed to have tricked the plane's computers to force the nose of the plane down to avoid a stall. Following the March 10 crash less than six months later - which followed a "very similar" track to the Lion Air flight, All Boeing 737 Max 8s were grounded by US regulators following dozens of countries and airlines doing so first.
"After this horrific Lion Air accident, you’d think that everyone flying this airplane would know that’s how you turn this off," said former FAA accident investigation division director Steve Wallace.
Meanwhile, investigators are now looking into how the new 737 model was approved. The Transportation Department's inspector general has begun an inquiry into the plane's certification, while a grand jury under the US DOJ is also seeking records in a possible criminal investigation of the plane's certification.
Posted by Juicing and Raw Foods Sunboy