Cult status American journalist and author, Hunter S. Thompson, has had quite the hedonistic reputation for guns, booze and illegal narcotics.  However in circles of alternative research he has a much darker and sinister side.  Most prominently known for his books Hell’s Angels and Fear and Loathing in Las Vegas, Thompson heralded a new form of journalism he called Gonzo in which the reporter not only becomes involved but often becomes the central figure in the subject he or she is covering. One such example of Gonzo journalism was his 1967 non-fiction work Hell’s Angels:  The Strange and Terrible Saga.  In his book Hunter Thompson not only befriends the Hell’s Angels he practically gets initiated.  Throughout the story he recounts absorbing himself into their sub-culture and participating in their activities such as traveling the California countryside by motorcycle.  According to a New York Times book review, Thompson related how he:
“drank at their bars, exchanged home visits, recorded their brutalities, viewed their sexual caprices, became converted to their motorcycle mystique, and was so intrigued, as he puts it, that ‘I was no longer sure whether I was doing research on the Hell’s Angels or being slowly absorbed by them.”
He reportedly ended his friendship with the gang after several members gave him a savage beating concerning a comment he made about one of their wives.
Things took an eerie turn for him and his Gonzo style journalism later in life after a series of unrelated events and disturbing claims unwittingly connected him to snuff films, sadism and ritual murder.  This is the untold story of Hunter S Thompson. Fear and Loathing in Las Vegas, Hunter’s most well known title, was another example of his gonzo journalism in which he literally immersed himself into the drug culture.  The book was so popular that it spawned a cult status movie of the same name.  Johnny Depp, who played the protagonist (Hunter), literally moved in with him prior to filming to get into character.
In the book, which according to “gonzo journalism” is a true account, he describes taking a dose of a powerful hallucinogen called adrenochome.  This drug, notoriously sinister in circles of alternative research is pure adrenaline allegedly only obtained from the gland of a soon to be dead or recently deceased human being.
Both in the book and in the film Dr. Gonzo (in the film Benicio Del Toro) apparently received the drug from what he calls a “satanist freak”.  From the book: “Never mind,” he said. “It’s absolutely pure.”
I shook my head sadly. “Jesus!  What kind of monster client have you picked up this time?  There’s only one source for this stuff…”

He nodded.
“The adrenaline glands from a living human body,” I said.  “It’s no good if you get it out of a corpse.”
“I know,” he replied.  “But the guy didn’t have any cash.  He’s one of these Satanism freaks.  He offered me human blood – said it would make me higher than I’d ever been in my life,” he laughed.
“I thought he was kidding, so I told him I’d just as soon have an ounce or so of pure adrenochrome – or maybe just a fresh adrenaline gland to chew on.”
This of course appears to be fiction or a joke in the script, however it gets cumulatively more bizarre.  Nonconformists and dissidents read on. In his 2005 book Hey Rube: Blood Sport, the Bush Doctrine, and the Downward Spiral of Dumbness on page 2 he states:
“The autumn months are never a calm time in America.  Back to Work, Back to Football Practice, etc…  Autumn is a very Traditional period, a time of strong Rituals and the celebrating of strange annual holidays like Halloween and Satanism and the fateful Harvest Moon, which can have ominous implications for some people…”  “There is always a rash of kidnapping and abductions of schoolchildren in the football months.  Preteens of both sexes are traditionally seized and grabbed off the streets by gangs of organized perverts who traditionally give them as Christmas gifts to each other to be personal sex slaves and playthings.“
This of course also appears to be some more Hunter S Thompson ramblings but stick with me. From her personal memoir blog, In Memory of Hunter S. Thompson: Postcard From Louisville, Kentucky,  Nickole Brown (Hunter’s secretary) stated that he once tried to force her watch a snuff film, which she claims she refused.  If you’re not familiar with this term, a snuff film is a video of a person either being raped, killed or both and is generally sold on the black market or dark web to sick wealthy psychopath sadists.  From her blog (which is cited at the bottom of this article):
“Other times I witnessed his atavistic side. Despite the rumors that followed me home when I left, he never held a gun to my head or laid a finger on me, but that’s not to say he didn’t throw a tantrum or two. Paranoid, he would lock everyone out of his cabin for hours at a time, intermittently setting off his alarm and firing guns into the air. One time I watched him beat his car because his cigarettes were locked inside, and another time he threw me out of the house for refusing to watch a snuff film. And he was hell on his new kitten, Hugo, especially when he felt I was paying it too much attention. He would snatch Hugo up, smudge his pink nose in cocaine, and send him darting across the kitchen floor.” Some say Hunter was just joking around in his disturbing Gonzo stories, however others, such as Russel (Rusty) E. Nelson claim that he wasn’t.  Rusty, the personal photographer of accused pedophile Lawrence King Jr. of the 1980’s Franklin Cover Up scandal, claimed that in 1988 Hunter S Thompson offered to pay him $100,000 to shoot a snuff film involving a child.  This offer he said he turned down, however 6 days after Hunter’s death he was arrested and his computers and cameras were confiscated.  There is a lot more to this story which you can find in the citations at the bottom of this article, his YouTube testimony is cited there as well. The Rusty Nelson and Nickole Brown testimonies aren’t the only accusations.  Whistle blower Paul Bonacci, who testified in the Franklin Cover Up scandal had an eerily similar account.  Don’t be surprised if you’re not familiar with this case, it was literally covered up.
In his disturbing and appalling book The Franklin Cover Up:  Child Abuse, Satanism and Murder in Nebraska, attorney and former Nebraska legislator John DeCamp exposed a sinsiter child prostitution ring revealing that the children of Boys Town School of Nebraska were being hustled in elite circles of celebrities and government bureaucrats.  Paul Bonacci, one of the child victims, testified in an interview with DeCamp that when he was a teenager in the late 1980’s he was forced to participate in raping and murdering for a snuff film which he claimed was directed by a man named Hunter Thompson.
It gets eerier after he hinted that this event took place at the notorious Bohemian Grove .  If you are not familiar with “The Grove” this is where elite finance oligarchs and heads of state go each year to party and take part in occult rituals including the infamous Cremation of Care.  Both of which cited at the bottom of this article.


LATE NIGHT WITH DAVID LETTERMAN: “I LIKE TO KILL”

In a 1988 interview with David Letterman on the Late Night Show, Thompson not only admits to being at the Bohemian Grove he also, in a disturbing manner, admits how he enjoys killing.  Clip provided in the citations below.  From the interview:


THE DEATH OF HUNTER S. THOMPSON

There appears to be some mystery surrounding his death as well.  The official report is that in the early evening of February 2005 Hunter S Thompson took his own life with a single shot from his Smith & Wesson 45.   Left behind, was a disturbing and strange nihilistic suicide letter titled Football Season is Over where he allegedly wrote:
“No More Games.  No More Bombs.  No More Walking.  No More Fun.  No More Swimming.  67.  That is 17 years past 50.  17 more than I needed or wanted.  Boring.  I am always bitchy.  No Fun — for anybody. 67.  You are getting Greedy.  Act your (old) age.  Relax — This won’t hurt.” However many claim that he didn’t commit suicide but that rather he was assassinated.  Critics to the official story base this belief mostly on the fact that his gun (a .45 semi automatic pistol) did not have a bullet in the chamber after he shot himself.  This bullet should have cycled in after he pulled the trigger.  One of the suggested motives was that he had recently been researching the September 11, 2001 terrorist attacks and was working on an article to expose it.  More on this cited in the links below.
His funeral attended by big name celebrities such as Jack Nicholson, John Cusack, Bill Murray and John Kerry went out with a literal bang.  His close friend Johnny Depp funded the funeral and spent a whopping $3 million to blast his ashes out of a massive cannon atop a 47 meter tower on his Colorado ranch.
Are these unrelated events and disturbing claims just a coincidence?  I’ll leave it up to you.  Whatever your thoughts, this is the untold story of Hunter S Thompson. 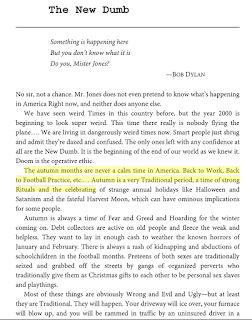