More Evidence of Evil and worship of false gods Part 3
2nd Kings 17:16 “And they left all the commandments of the LORD their God, and made them molten images, even two calves, and made a grove, and worshipped all the host of heaven, and served Baal.” Baal is another name for Lucifer as is Moloch and Molech

Who was and who still is Moloch/Molech? This all ties into the beliefs of Modern Witchcraft. Note the reference to the “goddess”. Can you say Feminist Movement?

Leviticus 18:21 “And thou shalt not let any of thy seed pass through the fire to Molech, neither shalt thou profane the name of thy God: I am the LORD.” 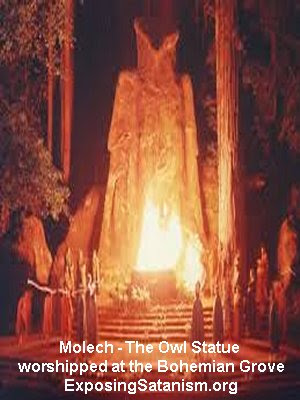 As with many details in ancient history, the exact origin of Moloch/Molech worship is unclear. The term Moloch is believed to have originated with the Phoenician mlk, which referred to a type of sacrifice made to confirm or acquit a vow. Melekh is the Hebrew word for “king.” It was common for the Israelites to combine the name of pagan gods with the vowels in the Hebrew word for shame: bosheth. This is how the goddess of fertility and war, Astarte, became Ashtoreth. The combination of mlk, melekh, and bosheth results in “Moloch,” which could be interpreted as “the personified ruler of shameful sacrifice.” It has also been spelled Milcom, Milkim, Malik, and Moloch. Ashtoreth was his consort, and ritual prostitution was considered an important form of worship.
The Phoenicians were a loosely gathered group of people who inhabited Canaan (modern-day Lebanon, Syria, and Israel) between 1550 BC and 300 BC. In addition to sexual rituals, Moloch worship included child sacrifice, or “passing children through the fire.” It is believed that idols of Moloch were giant metal statues of a man with a bull’s head. Each image had a hole in the abdomen and possibly outstretched forearms that made a kind of ramp to the hole. A fire was lit in or around the statue. Babies were placed in the statue’s arms or in the hole. When a couple sacrificed their firstborn, they believed that Moloch would ensure financial prosperity for the family and future children.
Moloch/Molech worship wasn’t limited to Canaan. Monoliths in North Africa bear the engraving “mlk”—often written “mlk’mr” and “mlk’dm,” which may mean “sacrifice of lamb” and “sacrifice of man.” In North Africa, Moloch was renamed “Kronos.” Kronos migrated to Carthage in Greece, and his mythology grew to include his becoming a Titan and the father of Zeus. Moloch is affiliated with and sometimes equated to Ba’al, although the word ba’al was also used to designate any god or ruler. Source Got Questions. See more there.

The latest Wikileaks classified email dump has exposed Hillary Clinton for what she really is – a member of the satanic establishment and practices child sacrifice and then has orgies with the blood with other nasty lesbian whores. Hillary Clinton is so deeply entrenched in the elite New World Order establishment that she even bows down to Moloch, the same occultist god they perform human sacrifice rituals for at the annual Bohemian Grove meetings.
Thanks to the Wikileaks Hillary Clinton Email Archive (30,022 emails, free to search), we now have more concrete proof that Hillary Clinton and other globalist elites are into the occult. Nobody randomly uses Moloch in a conversation. Most people don’t even know what Moloch is.
In an email from August 29 2008 that has just been made available to search by Wikileaks, a senior government staffer writes to Hillary Clinton, “With fingers crossed, the old rabbit’s foot out of the box in the attic, I will be sacrificing a chicken in the backyard to Moloch . . .” See the evidence here. Source website.


Although not related to Hillary Clinton directly, the same Spirit (Molech, Baal, Jezebel, Ahhhh we will reveal her in part 4) that possess her, is manifesting in those at the Large Hadron Collider (LHC) at CERN. Someone performed what said to be a “Mock Human Sacrifice” in front of the Shiva statue at CERN. All false gods are none other then Lucifer or one of his fallen angels he commands. It is that same god that Methodist Rev. William Shillady invoked and manifested at the DNC Convention, “the god of many names”! Folks, all of this ties together in one way or another.
Paying Homage to Lucifer – Satan – The Devil

Pictures of Clinton signaling to fellow Luciferians. See a Short Video Clip of her doing it while with Elizabeth Warren Click here.

In order to gain power from Lucifer you must offer up Human blood sacrifice. The preferred sacrifice is a young child or a baby in the womb. The Clinton’s and the entirety of the Democratic Party hardheartedly support this Legal option of blood sacrifice by Abortion. Yes, Abortion is a blood sacrifice to Lucifer! There are a three reports that came out at Life News. One I posted already in part two: Hillary Clinton: Make Christians Change Their Religious Views to Support Abortion The second and third are just as disturbing; Hillary Clinton is Upset Money to Stop the Zika Virus Isn’t Going to Planned Parenthood! The third will surely happen if she is elected: If Hillary Clinton Overturns Hyde Amendment, 33,000 More Babies Will be Aborted Every Year.
Yes she wants to change our minds and funnel money to cohort and fellow murderer Cecil Richards head of Planned Murderhood! Every murdered child is put into Hillary’s Satanic account. That is where her protection comes from. The shed blood of humans!
Satan, the Devil, copies and counterfeits everything that God does or has done. The Israelites were required by God to offer up the blood of bulls goats and lambs to cover sins. Satan requires it AS A SIN! There is power in the shedding of Blood and that is the reason for Murder and Wars! In the last part of this Series you will be shown who’s Blood is the most powerful and the most hated!
The blood that has been shed by the Clinton’s can’t be 100% proven by mortal man. The suspected body count of the Clinton’s is up to 53 as of this writing, that is the ones we know about. The last five are very recent and are very very suspicious to say the least. There is a person or persons out there who do know, ultimately God knows the truth.
The Sacrifice of Muammar Qaddafi and others while Hillary was Secretary of State.
One we do know for sure was Muammar Qaddafi the leader of Libya. Upon confirmation of his death, Hillary appears to be full of joy and bubbling over with delight, at the news! It takes a sick demented mind to enjoy and celebrate the death of another person. When Hillary meets her demise, millions will celebrate! We few, True Christians, will be relieved to know she can’t inflict any more suffering, but saddened that another lost soul has met its horrendous end!
“Secretary of State Hillary Clinton shared a laugh with a television news reporter moments after hearing deposed Libyan leader Muammar Qaddafi had been killed.” “We came, we saw, he died,” she joked when told of news reports of Qaddafi’s death by an aide in between formal interviews.” Source.
The murder of Gaddafi and all the other State sponsored murders, especially via all the drone strikes conducted while Hillary was Secretary of State, are also in her Blood sacrifice account. Lucifer could not be more pleased. Look at how he is blessing her in her endeavors and how charges that should be brought against her just slide off like water on a ducks back! Yes, she is most assuredly evil and Satan is blessing her!
Continued in Part 4 – Bill and Hillary Clinton are the modern day Ahab and Jezebel