Signs of the beast in Lutheran church.

Signs of the beast in Lutheran church.
Author: Morgan Franklin

I was invited to go to a X-mas music event at a church with family and friends. Although I didn't want to go listen and sit through Christmas dogma, I wanted to go and scope out the church.

Wasn't too long until I got my first sign. Once when you walk into the building and give your tickets to the administration they stamp your hand. Now what stamp your hand with was the "Ok hand sign emoji" which is the "666 hand sign" that the satanic elite use. Out of all the 1000s of symbols that they could have had on a stamp they choose the mark of the beast. Which was stamped on your hand just like in Revalation 13:16 "And he causeth all, both small and great, rich and poor, free and bond, to receive a mark in their right hand, or in their foreheads:" (Image A)

Now for the performances. The talent was amazing for the event, since every artist that was on the stage was a member of a successful band (e.g. Alice Cooper, War, Chicago, and a few others). They were mixing the very shallow Christian music with hit songs through the decades. The only message all the music gave was that to praise that Jesus was born and nothing else. Renown Christian bible teacher Chuck Missler describes modern Christian music as 7/11 music, where they repeat 7 words 11 times, and this event was just that.

When intermission came, I decided to walk around and noticed that there wasn't any bibles anywhere in sight in the worship hall. Then I discovered in a bookcase next to where they were serving cookies and water. That it was empty except on  the top shelf that only had 5 NIV bibles on it. What was interesting was not that they were using the NIV bibles but that there was a massive lack of bibles everywhere. As if the members of the church are just getting preached too without referencing any bible.

What finally, I was led to which was confirmation from Dad (Yahua). On all of the reserve seats in the worship hall had "666 hand signs" that were upright and inverted.  Plus the whole seat was draped in Red. So the hand stamp wasn't a coincidence, this is a trend throughout the church. Now, possibly the reserved seats could have been for the covert satanists in the church administration. It's sad to see that most of the sheep don't have the "Eyes to see" and are being fooled by wolves in sheep's clothing. We left after the intermission. (Image B)

This doesn't come as a shock since back in 2016 the Lutheran Church signs a joint declaration with the Catholic Church. Claiming that they have a common past. Which comes as a mockery to their name, since Martin Luther stood against the Catholic Church to start Protestant Reformation. Keep our eyes peeled to see what other Christian denominations follow suite in 2020.

Ezekiel 34:10
"Thus saith the Lord GOD; Behold, I am against the shepherds; and I will require my flock at their hand, and cause them to cease from feeding the flock; neither shall the shepherds feed themselves any more; for I will deliver my flock from their mouth, that they may not be meat for them." 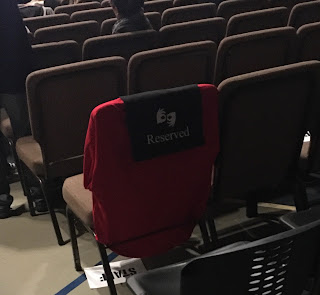