Colleges Track Hundreds Of Thousands Of Students Using Their Phones

"Graduates will be well prepared … to embrace 24/7 government tracking and social credit systems."


An app created to track the attendance of 'less academically inclined' college athletes is under fire, after over 40 schools have begun using the technology to monitor students campus-wide, according to the Washington Post.
Developed by former college basketball coach Rick Carter (who is currently under a restraining order by DePaul University for allegedly threatening the athletic director and head basketball coach), the Chicago-based SpotterEDU app uses Bluetooth beacons to ping a student's smartphone once they enter a lecture hall. About the size of a deck of cards, they are installed in covert locations on walls and ceilings.

School officials give SpotterEDU the students’ full schedules, and the system can email a professor or adviser automatically if a student skips class or walks in more than two minutes late. The app records a full timeline of the students’ presence so advisers can see whether they left early or stepped out for a break. -Washington Post

Syracuse University IT instructor Jeff Rubin uses the app to encourage his students to attend lectures - awarding "attendance points" to those who show up. Rubin is also notified when students skip classes.

It's not a bad cover story. But it is bullshit. He fails to mention that using the app, you give permission for the microphone and camera to be used against you. 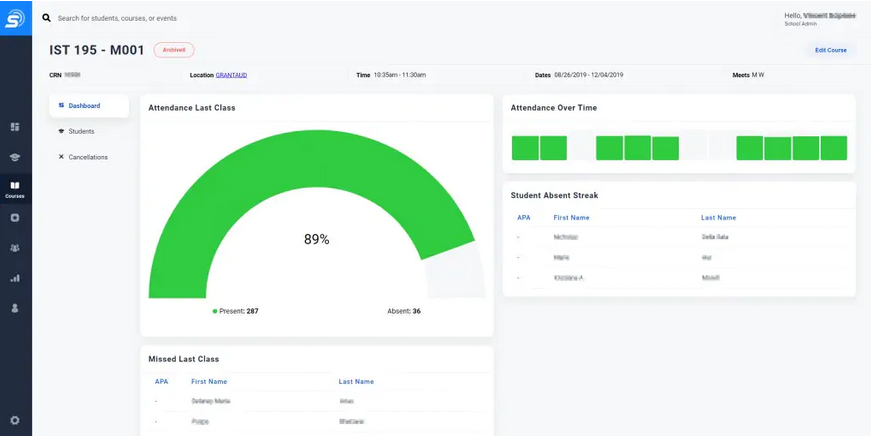 "They want those points," said Rubin. "They know I’m watching and acting on it. So, behaviorally, they change."

According to Rubin, his 340-student lecture has never been so full at around 90% attendance.

Double Secret Dystopia
Understandably, not everyone is thrilled with the intrusive new technology, which many argue breaches students' privacy rights on a massive scale.

"We’re adults. Do we really need to be tracked?" said sophomore Robby Pfeifer, a student at Commonwealth University in Richmond, which recently began using the campus' WiFi network to track students. "Why is this necessary? How does this benefit us? … And is it just going to keep progressing until we’re micromanaged every second of the day?"

School and company officials, on the other hand, argue that monitoring students is a powerful motivator and will encourage students to adopt habits geared towards success.
"If they know more about where students are going, they argue, they can intervene before problems arise," according to the Post.

That said, some schools have taken things further - assigning "risk scores" to students based on factors such as whether they are going to the library enough.


The dream of some administrators is a university where every student is a model student, adhering to disciplined patterns of behavior that are intimately quantified, surveilled and analyzed.
But some educators say this move toward heightened educational vigilance threatens to undermine students’ independence and prevents them from pursuing interests beyond the classroom because they feel they might be watched.

“These administrators have made a justification for surveilling a student population because it serves their interests, in terms of the scholarships that come out of their budget, the reputation of their programs, the statistics for the school,” said Kyle M. L. Jones, an Indiana University assistant professor who researches student privacy.

“What’s to say that the institution doesn’t change their eye of surveillance and start focusing on minority populations, or anyone else?” he added. Students “should have all the rights, responsibilities and privileges that an adult has. So why do we treat them so differently?” -Washington Post


"It embodies a very cynical view of education — that it’s something we need to enforce on students, almost against their will," said UCSD digital scholarship librarian Erin Rose Glass. "We’re reinforcing this sense of powerlessness … when we could be asking harder questions, like: Why are we creating institutions where students don’t want to show up?"

And watch...tell someone and they will get angry with you. No one wants to hear they are being spied on. It's kill the messenger time and every time.

May be for school officials, who Carter said can split students into groups, such as “students of color” or “out-of-state students,” for further review."

When asked why an official would want to segregate out data on students of color, Carter said many colleges already do so, looking for patterns in academic retention and performance, adding that it “can provide important data for retention. Even the first few months of recorded data on class attendance and performance can help predict how likely a group of students is to” stay enrolled.
Students’ attendance and tardiness are scored into a point system that some professors use for grading, Carter said, and schools can use the data to “take action” against truant students, such as grabbing back scholarship funds. -Washington Post

Meanwhile, another app from Austin-based start-up Degree Analytics uses WiFi check-ins to track around 1,200,000 students across 89 state universities, private colleges and other schools, according to the Post.

Founded in 2017 by data scientist Aaron Benz, the company claims that every student can graduate with "a proper environment and perhaps a few nudges along the way."
According to Benz, his system can solve "a real lack of understanding about the student experience" by using campus WiFi data to measure and analyze 98% of students.

But the company also claims to see much more than just attendance. By logging the time a student spends in different parts of the campus, Benz said, his team has found a way to identify signs of personal anguish: A student avoiding the cafeteria might suffer from food insecurity or an eating disorder; a student skipping class might be grievously depressed. The data isn’t conclusive, Benz said, but it can “shine a light on where people can investigate, so students don’t slip through the cracks.”
To help find these students, he said, his team designed algorithms to look for patterns in a student’s “behavioral state” and automatically flag when their habits change. He calls it scaffolding — a temporary support used to build up a student, removed when they can stand on their own.
At a Silicon Valley summit in April, Benz outlined a recent real-life case: that of Student ID 106033, a depressed and “extremely isolated” student he called Sasha whom the system had flagged as “highly at-risk” because she only left her dorm to eat. “At every school, there are lots of Sashas,” he said. “And the bigger you are, the more Sashas that you have.” -Washington Post

Read the rest of the report here.


Coming to a work place near you. You new supervisor will be a robot that will track your every movement, and pay special attention to you video-wise if you show any signs of rebellion.
------------
‘we could be asking harder questions, like: Why are we creating institutions where students don’t want to show up?"’And how about the most obvious question of all: Why do students need to come to your useless classes for useless degrees that won’t land them a decent job?

You can't id a person with a wifi or bluetooth ping.  The only way this tech works to track someone is if they install an app or register their device.
How about just not installing tracking software or refusing to register?
Seems like a fairly easy way to shut this down if students really cared.
I bet no one at these schools even complains.  They probably just think it's part of the requirements of modern society.
------------
"To help find these students, he said, his team designed algorithms to look for patterns in a student’s “behavioral state” and automatically flag when their habits change."


This information will be provided to your state Department of Mental Health, so you can be assigned, tested, analyzed, treated, and re-programmed by their professionals.  You can check out any time you like, but you can never leave.

This is some scary shit. Analyzing our behavior for changes? What fucking business is it of theirs? Fascism is what this is...fascism.
-------------
"Now it's illegal to speak truth"
Minute 11:30: Trump signs executive order "silencing every single debate that the young people have in these universities and is just the first step ..."
'... can't say that the Rothschilds created Israel'
'... illegal to say that the attack on the USS Liberty was a war crime, or to even blame Israel for it'
'... or that 911 was an inside job orchestrated by the Mossad and CIA'
"... it's a mess"

Minute 54:30: "Basically it's a worship of a race, it's a supremacism about the race, he made it all about the race and Trump signed it."
Minute 28:00: -Trump appointed 140 judges "with daily briefings on Talmudic law". When they speak of morality they are speaking of Noahide law, not the 10 commandments. "What is wrong with what's going on it's not putting the American people first, we are actually showing favoritism of another nation."
Minute 41:30: -"It doesn't matter if you're *** or Gentile." Not according to Talmud Jews. "They reject Jesus"
Evangelicals Unknowingly Help Promote New world Order
https://youtu.be/0y8mjq2eUxA

-In 2014 Netanyahu said the Talmud would become the basis of law for
Israel one day.
-In 1991 (same year of his NWO speech) Skull and Bones, Satanic George Bush Sr. signed the
Talmudic 7 Noahide laws into US law.
-Currently the Jewish Sanhedrin in Israel have been pushing Trump to
enforce these laws, I guess this Executive Order silencing free speech is the start.

AND THIS:
-USMCA trade agreement already passed by congress contain aspects of TPP and the Paris Climate accord, weakening US sovereignty, handing our law making over to foreign bureaucrats and forcing us to accept thousands of 'climate refugees'?? If the senate passes this we will be subject to international law, GUESS WHAT HAPPENS TO OUR GUN RIGHTS.

-Why are the peaceful law abiding citizens of Virginia now forming militias and being threatened by the tyrannical socialist democrats (enabled and funded by globalist elites and foreign countries) if they don't give up their gun rights? CAN YOU SEE AN 'EVENT' COMING TO THIS AREA?
IT'S WHAT THEY DO. The militias may be infiltrated or will they use FF snipers like in the Ukraine?

Major concerns with Trump if he waffles on Virginia gun rights and USMCA and allows US education to be taken over by US Talmudic infiltration. if this is where we're heading forget 2020 because it's end times folks, get right with the Lord Jesus Christ.

Revelation 2:9: I know the blasphemy of them which say they are Jews, and are not, but are the Synagogue of Satan.

All you Goyim might want to find out what's in the Talmud, their hate of Jesus is unreal, saying this is not anti-Semitic, just facts. Not good for Christians (nor anyone, unless your one of them) they more than hate us.

Revelation 3:9 Look at those who belong to the synagogue of Satan ...
https://biblehub.com/revela...