Vax weapon Blood Clot Worm and the Great Die Off

The Great Die Off

11Therefore thus saith the Yahua, Behold, I will bring evil upon them, which they shall not be able to escape; and though they shall cry unto me, I will not hearken unto them. 12Then shall the cities of Judah and inhabitants of Jerusalem go, and cry unto the gods unto whom they offer incense: but they shall not save them at all in the time of their trouble.

This is an alleged blood clot. I showed this to a former nurse and she said it does not look like a normal blood clot.

This was taken from a woman over 50, to save her life. They found this where xrays allegedly showed a blood clot mass. She was vax weaponized 2 weeks ago. 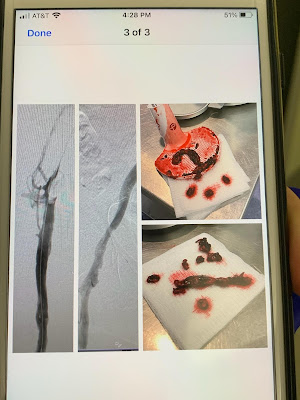 This summer will go down in what's left of history as the Great Die Off.

1 in 7 will pass away within 2 years, just from the first 2 inoculations.  Vaxxed and Unvaxxed.

Every family will be touched.

Resulting in two groups of people by the end of Fall. The vaxxed, from the first group.

These are they that have survived the weapon, are marked with Satan's mark, and are yet living. They can easily be recognized by the following signs.

All of the above will start to be visible and these signs, though not noted by others as of yet, are already appearing amongst the vaxxed. As time progresses, these signs will go from subtle to outright definable. Still born and rake births will be hidden, covered up, and most rakes taken at the hospital. These are born outright, with the above mentioned conditions, slowly growing synapses fail to form, leaving a demonically possessed creature hungry for living flesh.

These unfortunates, vaxxed for whatever reason, need our understanding and love. Reading about such hateful comments as the stupid, dumb as a hammer, idiots, etc., reveals a stunted soul, unable to appreciate the magnitude of their changing world, and without sympathy is actually counter productive to their own spiritual salvation, especially from the vax weapon. Those whose first reaction to any crisis is hate, have a long and painful road to travel, in these days. If this offends you, then your heart is stunted. Seek to fix that asap.

The second group is that group of souls in whom the blood of the Lamb has covered. They will look, act, and feel as robust as they've ever felt, given their physical shape, diet, and lifestyle. Those will wish they took better care of themselves.

This lot will be openly despised as murderers. People will actually attempt and kill, some of this group, thinking they are doing God and humanity, a favor. For that will be the conditioning they receive in that time; which has already started via the shaming propaganda going forth right now.

As their free will fades and the controls tighten on their mind and soul, the first group will find their thinking and behavior, not visible to themselves, becoming

The first group will see the second group as enemies to be at first removed and then, when the word goes forth, to be killed. They will be told that their continued suffering is directly caused by the unvaxxed spreading new strains which is making them sicker; furthermore, they will be told, by August, that if it weren't for the unvaxxed, that all those sufferers from group one, would be well and it's the unvaxxed that is doing this to them.

This will be so.

Those with the wrist band, and appropriate cell phone app, will actually form into groups, going into public places to seek out the unvaxxed. Though, due to the restrictions on unvaxxed buying or doing business, these will of course, be difficult to find. Then the Karens of the vaxxed will hit upon the programmed idea that the only way to save family and friends, is go door to door and seek them out.

For the sake of the children.

Children will turn against fathers and mothers, friends against friends, et al. “He/she whomever would never do that. They're my best friend.”

They used to be. That part of their soul and mind is atrophying. It's not their fault. They are becoming beyond reason, as they undergo their satanic changeling event.

The military and law enforcement, already NWO compliant, will deal with unvaxxed at check points and the like.

By Christmas, all will have changed. What we want, who we are, where we are going.

I'm very sorry to have to put this out. I just received it this day and am sickened.