Breaking, Antifa is putting out pallets of propane tanks and lumber all around DC

Just like the piles of bricks mysteriously appeared all summer and fall so BLM and Pantyfa can destroy property and kill people. 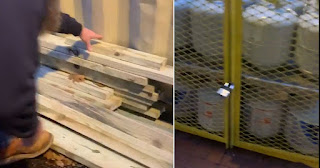 Video footage captured on the streets of Washington, D.C. Tuesday afternoon shows the bizarre presence of a 2×6 plank lumber cache and a locked stockpile of propane tanks on a deserted sidewalk ahead of Wednesday’s highly anticipated January 6 Stop the Steal rally.

The footage was captured by a Trump supporter named Tina, and has rapidly gained attention on social media.

“Holy s**t, we’ve got 2x4s,” Tina says as another onlooker examines a pile of white 2×6 planks stacked next to the propane cache.

“2x6s,” the man announces upon further examination of the lumber.

“2x6s and propane tanks!” the camerawoman exclaims. “What the f**k are these doing on the streets of D-f**king-C?”

Now we find this on the streets of DC ! 🤔🤔🤔🤔🤔 pic.twitter.com/zuqDgZQW0m

The variant of lumber seen in the footage bears a striking resemblance to the wooden staffs and planks historically used by far-left groups such as Antifa to club people with whom they disagree.

Propane can be used an accelerant for acts of arson, of the type often perpetrated by Black Lives Matter rioters and far-left anarchist militias.

Another cache of construction materials that was left out next to a work site has also drawn attention on social media.

This is DC by Freedom Plaza … they say it’s for construction work but it’s left out over night ! 🤔🤔 be aware patriots.. watch your 6 pic.twitter.com/ATjuafuq5w

Black Lives Matter and Antifa chapters have already voiced their intentions to confront Trump supporters in the streets of Washington, D.C. during Wednesday’s massive Stop The Steal rally, which will unfold parallel to the day’s Congressional vote on the electoral college.

Supporters of the President may already be at risk, as local officials have historically used law enforcement agencies to quash conservative protests while ignoring the violence of Black Lives Matter and Antifa.

The leader of the Proud Boys, a conservative fraternal organization that often tasks itself with providing security for vulnerable Trump supporters during events in D.C., was arrested this week and ordered by a judge to never set foot in the city again.