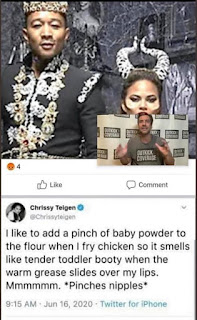 The witch indirectly admits to cannibalism of children.

Under NO CIRCUMSTANCE does ANY human being in their sane mind stage a cellular-phone camera photo shoot while simultaneously miscarriage a baby, edit and post the photos within minutes. full stop.

people that still take this at face value, offer 'sympathy' and descend into a rage when other people question or mock the obvious fraudulent validity, are the definition of the hopeless, lost and utterly brainwashed NPC's that our society will have to find a way to do away with.

I mean think about this, Chrissy Tiegan is an absolutely hysterical attention whore, and is the single most mouthy, attention-seeking, social media driven, post-modern stunt-whores on the internet. EVERYTHING in her circle of Hollywood is a careful, EVIL creation, a bastardization of REAL life, REAL peoples emotions, and this here, is perhaps the worst, most tragic human occurrence.
Losing a baby for real, is probably the most awful thing that can happen to a human, especially a woman.
What kind of person is capable of mocking this, other than some LITERAL satanic whore?

Every single aspect of this public display was designed to make a mockery of the sanctity of human life. This is her bragging about how powerful she is that she has the ability to entrust person-hood onto another based purely on her current emotional state. 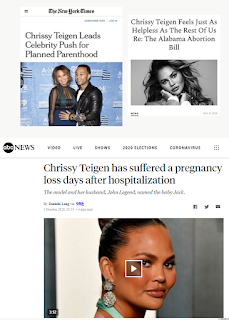 Her and legend are on the black book for Epstein Island.

she has said some pretty evil pedo shit in live interviews because she is a brainlet
deleted like 6 years worth of twitter history because she says shit like "I wanna Anthony Weiner this boy" and a lot worse.

She was a major spokesperson for planned parenthood in 2016 after a shooting occurred.

She lost her baby at 6 1/2 months and first thing she thought to do is put it on the gram for the world to see. Left wing cabal blows it up on Twitter for 24 hours like she is princess Dianna 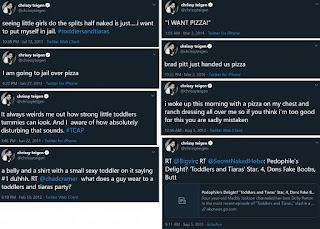 Actually Lucifer is your master, and he's a tranny little bitch.

Chrissy had a miscarriage. It was sacrifice for Moloch because of her cheese pizza tweets and not ever shutting the fuck up so the cabal did sacrifice. Oct 1st is an important day as well for these things.