Business Leaders Who Reject Woke Culture To Be 'First People Lined Up Against The Wall And Shot In Revolution': Ex-Twitter CEO

Frankly, if one aren't with the Beast system...they want to kill us all.

If one needed any further evidence of Twitter's far-left corporate culture, look no further than former CEO Dick Costolo - who went full Bolshevik in a Thursday Twitter rant warning that "me-first capitalists" who don't agree with injecting political activism into the workplace will be "the first people lined up against the wall and shot in the revolution," adding "I'll happily provide video commentary." 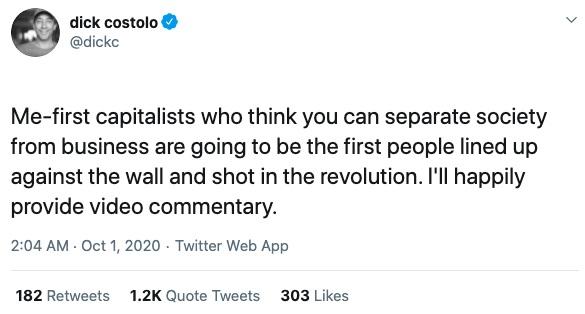 Costolo, a partner at Index Ventures and who sits on the board of Patreon (which got spanked in court for deplatforming conservatives), ran Twitter from 2010 to 2015.

As Reclaim The Net writes, "Costolo was replying to a tweet related to how Coinbase’s CEO has decided to separate business from political activism and offer an exit package for those employees who feel they can’t work in a company that doesn’t want to be hindered by politics and activism, as so many other companies have been distracted by in recent times."

REMINDER: Twitter Censored the PRESIDENT OF THE UNITED STATES for saying he would Enforce the Law.

Meanwhile this is the Former CEO of Twitter https://t.co/SFcXrlZqC6 pic.twitter.com/OUgomB9QMg

Hey @TwitterSupport Just curious if there is a public list of people exempt from your Terms Of Service https://t.co/I8zbWeGonB

Capitalists...EXECUTE THEM. this guy is unstable, dangerously unstable.

it’s been 13 hours and this tweet is still up, yet somehow i got suspended for telling someone their mom’s a hoe. https://t.co/WBD5n62ZgN

Meanwhile, Costolo is finding support on the left for his murder fantasy - such as Media Matters editor Parker Molloy.

The masks are dropping pic.twitter.com/CFomcF585j