Tiffany Dover is dead. Using a woman called AMBER to double for her. 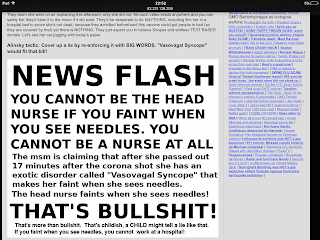 Since ~10h after taking the vaccine, she has refused to make any appearance, say a word, or even post on her instagram despite the fact she's a typical instathot who normally posts every 2-3 days. Some of her family and a nurse that worked in the same hospital as her RIP-posted on her facebook before shit got scrubbed. All communications since then has happened not through herself or family, but through the hospital's social media accounts. Journos asked to interview her to put the matter at rest, and the hospital said "no". Endless amounts of "weird" surrounding the matter that I won't go over in this post. Vaccine almost certainly killed her.

When they start using crisis actors and doubles, like they do for the Hildebeast, you KNOW she's dead.

Live vaccination of a nurse, she collapses about 17? minutes later, 1 or 2 days later she does a short interview saying she's been fainting about 6 times the last 6 weeks and it's completely normal.
Says it's some condition triggered by pain even though you'd expect that to trigger fainting almost immediately.
Very active social media presence stops, some weird youtube channels created right after the collapse uploading old videos with edited audio to seemingly make it seem like she's still active.